The Pettis County Ambulance District is looking ahead to the Missouri State Fair and evaluating what services will be needed, after hearing during its regular meeting Tuesday that the Missouri Disaster Response Team would not be available this year due to budget cuts.

“For the past few years DMAT has provided essentially a field hospital on the fairgrounds,” said Interim PCAD Administrator Eric Dirck. “So things like stitches, if someone gets heat stroke or any other non-life threatening emergencies. They did this all free-of-charge too.”

Previously DMAT has asked local ambulance districts and emergency entities to help fund these services; PCAD was considering a funding request between $5,000 and $7,500 to help offset costs. Dirck told the PCAD Board of Directors on Tuesday he received word the state had cut the disaster response budget and would no longer be able to set up field services.

“This won’t just affect the Fair,” Dirck continued. “When we’ve had many disasters, the Joplin tornado for example, DMAT was there in a matter of hours setting up disaster relief and field hospitals. From what I’ve heard, they won’t be able to do that either, we’ll have to rely on FEMA and federal aid to arrive which can take a few days rather than be immediate.”

DMAT has not always been available at the Fair, Dirck estimated 2012 was the last year without it, and that the State Fair Volunteer Firefighters can provide some basic live-saving services, though anything advanced would have to be transported to a hospital.

“I think the ER (at Bothwell Regional Health Center) is going to see the bulk of these cases,” he said. “But PCAD will be called on more often to help transport patients to the ER. We’ll prepare more in the next few weeks to aid the Fair as much as we can, but losing DMAT is a real loss for the Fair community.”

The board agreed to write a letter in support of DMAT funding and send it to local representatives and the governor. 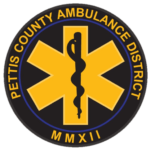